Perhaps you might not think much of it when you drop your small change into a charity collection box on the counter at our tills. But we chatted with Stephen Pugh who runs local charity, Tracey’s Dream who told us how much of a difference this really makes.

Stephen set up Tracey’s Dream in memory of his late wife, who sadly passed away from cancer after a courageous battle. He has had one of their collection tins in our Farm Shop for some time now and says that the money raised is invaluable.

The charity initially funded a caravan at a local site in Evesham. Terminally ill patients and their families could use it for respite breaks. It brought much happiness to lots of people. National lockdowns throughout the Covid-19 meant that the caravan wasn’t being used. So sadly, the charity no longer have it. It was a hard decision to make.

However, resourceful Stephen found a way to continue to support those suffering with terminal diagnoses, throughout a hugely challenging year. Stephen and his son Curtis use the donations to make up pamper packs. These are then given to hospices and hospitals in the West Midlands. 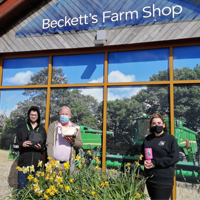 Containing a few luxurious pamper treats, Stephen says he sees firsthand how something so simple is so much appreciated. It is the little touches to show that you MATTER, that people are so grateful for. As well as the patients themselves, the charity ensures that family members aren’t left out either. Plus, this way the charity reaches and helps hundreds more people than was possible with the caravan. 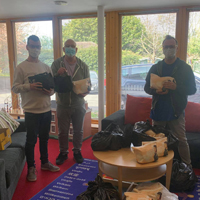 They’ve so far distributed over 500 pamper packs. The last donation from the collection tins on our counter was £101, with a pamper pack costing £7.

So, we’re passing on a huge thank you from Tracey’s Dream to you, our wonderful customers! You really do make a difference with every penny put in the tin.

You can find the Tracey’s Dream Facebook page for more information here.

It's just ONE WEEK TO GO until our Restaurant reop

To spread a little cheer we’re giving away free

Wet and windy Saturdays call for Hot Chocolate and

Becketts Conference@Becketts_conf
#BrumHour We are situated in South Birmingham, Junction 3, M42. If you need some office space or a small meeting room to catch up with colleagues in a semi rural environment then give us a call to see if we can help. ow.ly/oG0t50EHfN1 pic.twitter.com/g9CmADzXsP
9th May 2021 - 7:15 pm
5 4
Follow Becketts Farm

When this happens, it's usually because the owner only shared it with a small group of people or changed who can see it, or it's been deleted.
View on Facebook
· Share

Less than ONE WEEK TO GO 🎉It's official, we'll be allowed to open our Restaurant doors once more from next Monday 17th May for indoor dining! Our team are working hard behind the scenes to get us back up and running safely, and we will be serving the delicious food that you know and love! Here's the decision, breakfast or lunch on your first visit back? 🤔Bookings can be made online here ➡️ www.beckettsfarm.co.uk/restaurant/restaurant-reservations/ and tables in the first week are going fast! So you'll need to be quick 🏃‍♂️🏃‍♀️🏃‍♂️ ... See MoreSee Less

From this coming Monday, our Conference Centre will be allowed to re-open for meetings and events. For more information, head over to our website or get in touch us on 01564 823402 📞 ow.ly/SBLc50EIZuN ... See MoreSee Less

BECKETTS FARM RESTAURANT 🍳 ☕️ 🍔 is reopening a week today and we just can’t wait. It’s an exceptional farmhouse restaurant and coffee shop popular for breakfasts, Sunday carvery, afternoon teas and much more. The farm shop remains open, and takeaways are also available from the restaurant.🗓 Becketts Farm restaurant is re-opening on Monday 17th May, to book a table please visit their website. Walk-ins are also welcomed.7️⃣ days til Becketts Restaurant reopens Our favourite things about this restaurant:🥕 Based next door to their brilliant farm shop, each dish is made from scratch using quality local ingredients.🍳 Becketts Breakfast, where do we start. It’s a great place to enjoy an award-winning breakfast.🧁 Afternoon tea for two, enjoy a range of freshly baked cakes.🧀 Ploughman’s plank- award winning and full of homemade delights🌻 Becketts sunflowers are back this summer, make the day of it whilst you’re there.We’re doing spotlight posts on the great independent restaurants in our local area that will be reopening their doors this month. 💰 home dine members save 10% off the bill in the restaurant and farm shop📲 Visit www.home-dine.co.uk to see how you can support local and join today for FREE for 3 months.🍏 Download the brand new home dine app available on iOS apps.apple.com/gb/app/home-dine/id1550837261, Android coming very soon.#solihull #independentsolihull #supportlocal #supportsmallbusiness #solihullfoodie #welovesolihull #shoplocal #smallbusinesssolihull #homedine #restaurant #sundayroast #brunch #afternoontea ... See MoreSee Less