It’s almost March – hard to believe when my last blog contained stories from Christmas and with the sub-zero temperatures outside there’s certainly no sign of spring just yet. We’re hoping for warmer weather over the next couple of weeks as we will ideally need to start applying the first lot of fertilisers to the oil seed rape and the wheat. 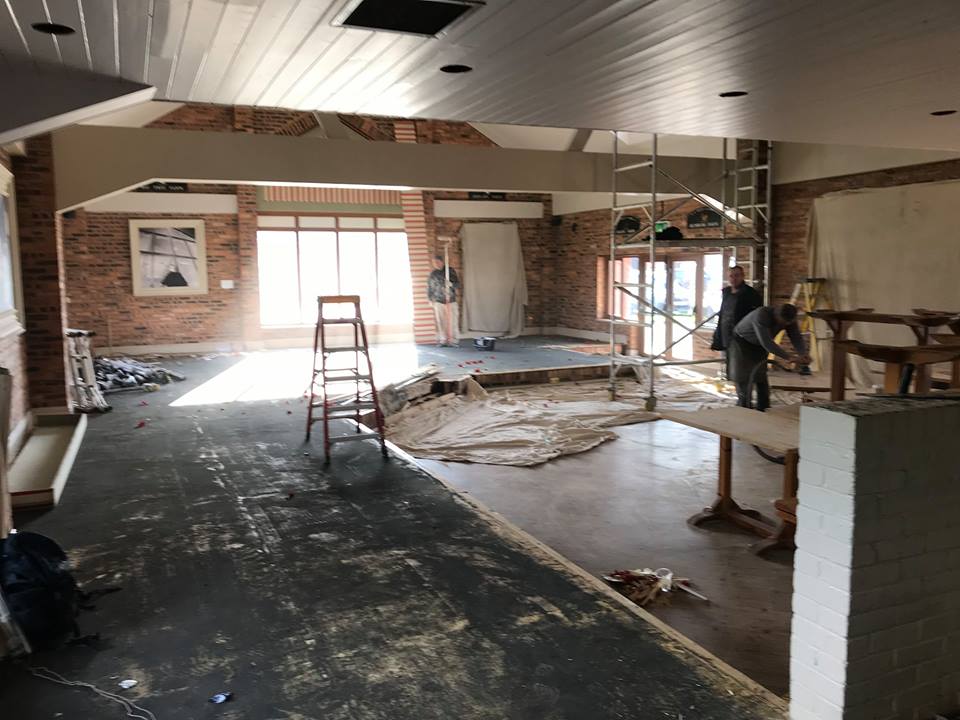 Cold as it may have been, February was a very busy and exciting month here at Becketts. During the first fortnight, we closed the doors to the restaurant for a fortnight, something we haven’t been known to do since 2008. All with very good reason, the Restaurant saw its first full refurbishment in 10 years and the results – I hope you’ll agree – are brilliant. 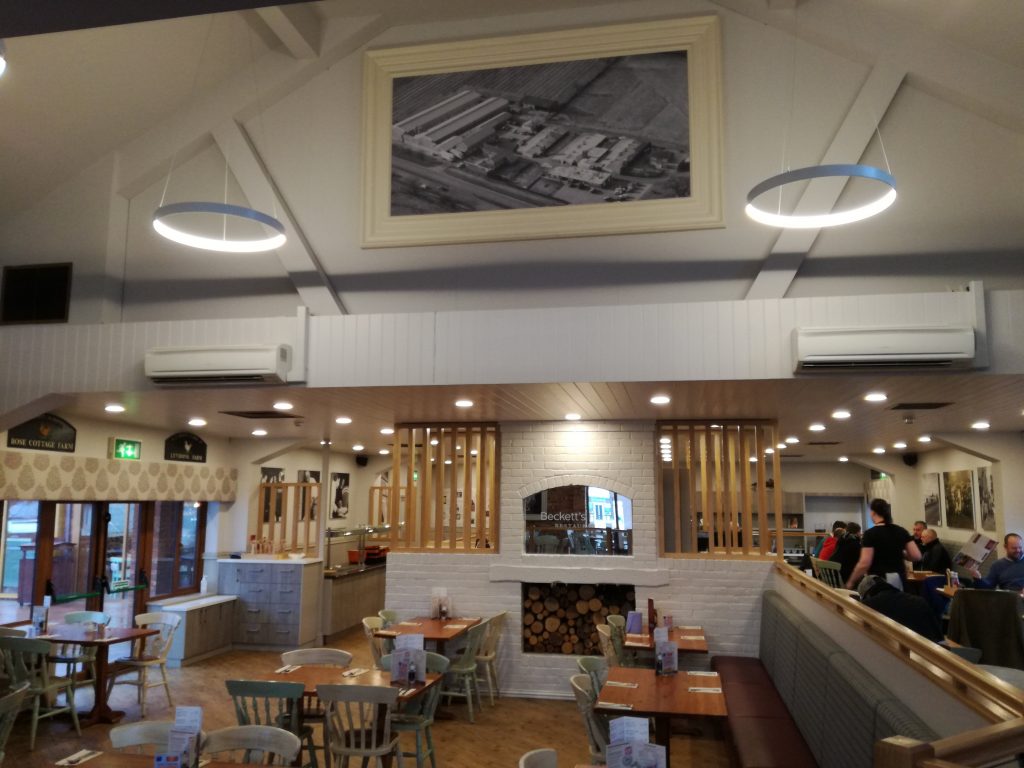 In planning the refurb, I was mindful that I didn’t want the look and feel of the place to change dramatically, it is important that when people visit Becketts there’s a sense of it being just how they remember! We’ve been a part of the community for over 80 years now and the restaurant has been established almost 25 years so it is important for people to feel ‘at home’ when they visit us. 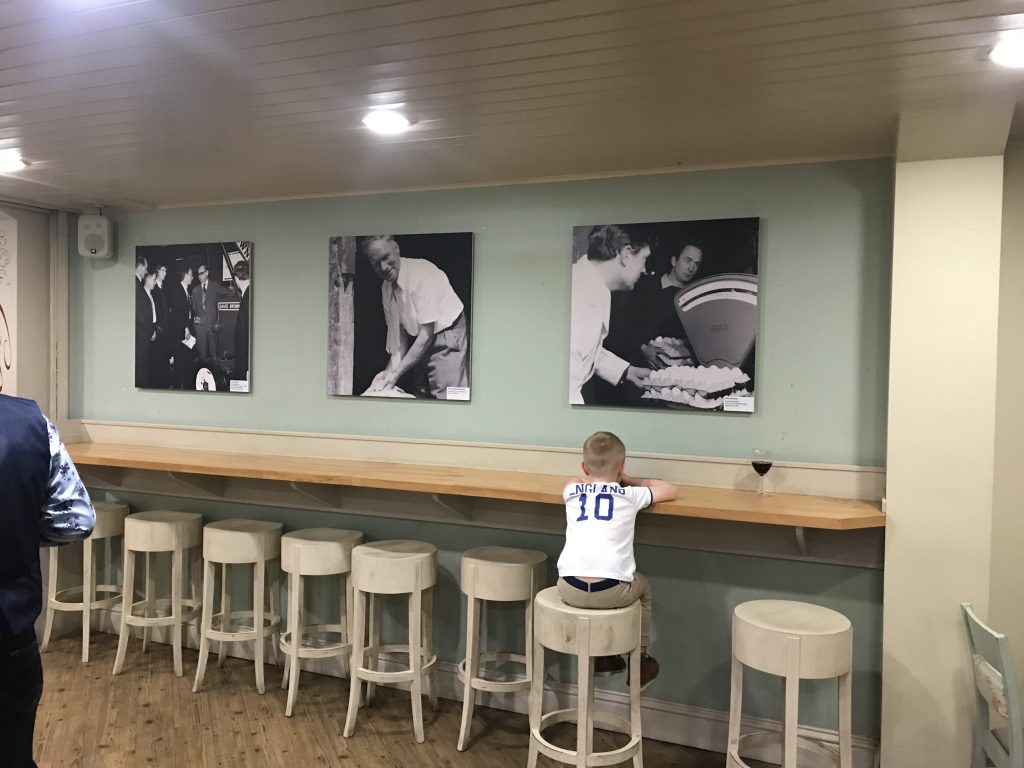 I attended a milestone birthday party for a close friend, held in the restaurant just before we closed for refurb. It dawned on me that this was the last party in the ‘old’ restaurant and so I took the opportunity to take a picture of the wall that was removed in the Coffee Shop area before it
was knocked down. The pictures on the wall have been kept and we’ve put them behind the carvery area. There’s a new edition to the black and white photos on the walls in the restaurant. Sat in the back section of the restaurant if you now look up you’ll see an aerial photo of the Becketts Farm site in the early 90’s. 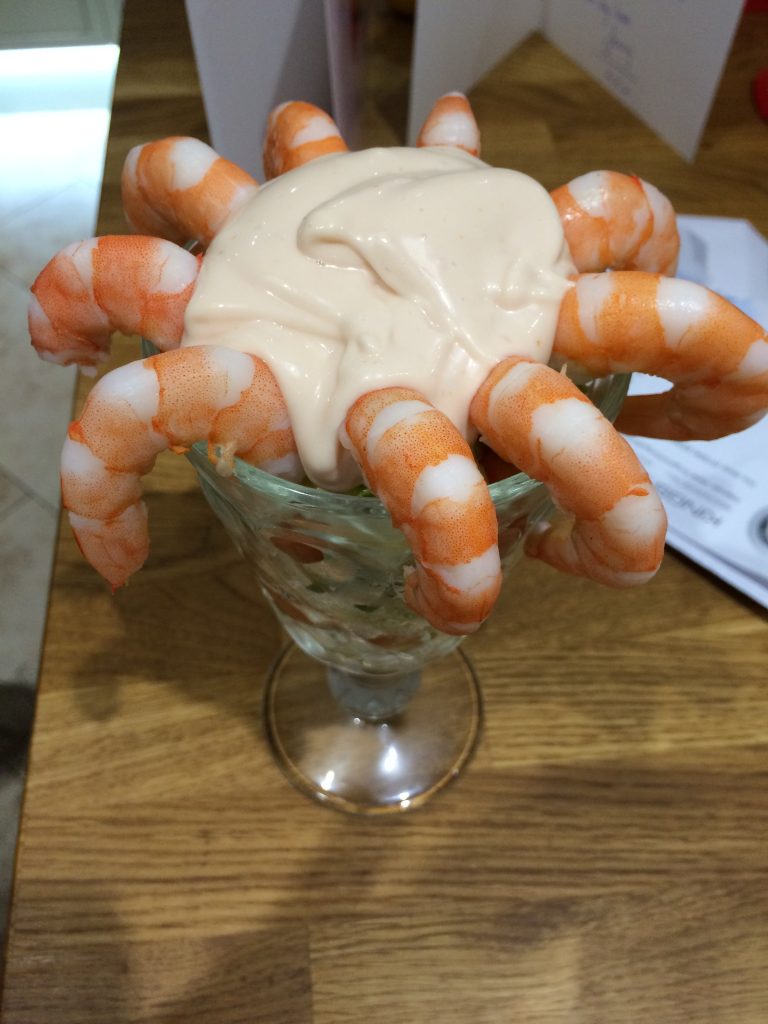 I’m still really enjoying cooking, and created a lovely prawn cocktail starter dish the other day. Delicious as it was I’m not sure it would go down too well on the new restaurant menu, as I was a little over generous with the prawns which might not be quite economically viable in our restaurant! Head Chef, Andy has worked to create a delicious new menu though in time for the relaunch, try the Oxtail Pie – I highly recommend it.

As well as cooking at home, I’ve been doing some DIY jobs. The felt tiles on the garage have been ripping off so I have battened it and retiled. Forgot how stiff your legs get doing that sort of thing. 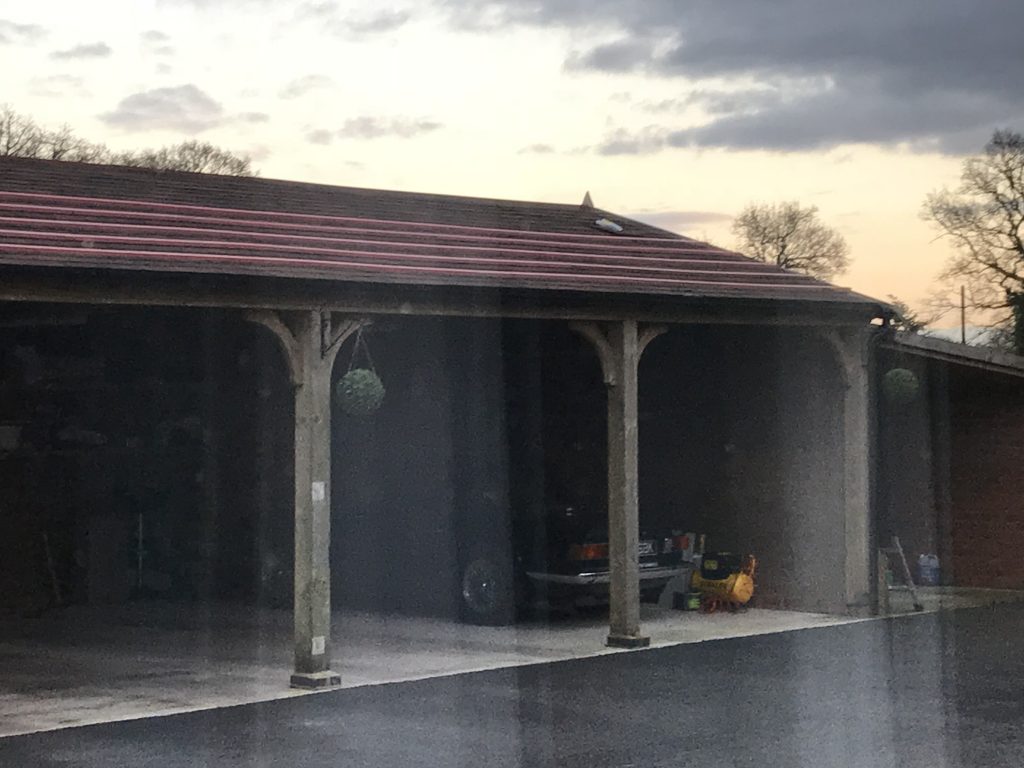 I’ve done a couple of public speaking events recently, which I have enjoyed. Firstly, I was asked to speak at an event for the ex-employees of the gas board about Becketts Farm and received such a warm welcome. My second talk was given at Woodrush High School on their Enterprise Day which they hold annually for the year 10 group. It’s always an honour to speak at this, if a little difficult to know how to pitch the talk – the brief is to ‘Inspire’ the students by talking about your line of work. I was delighted to receive a handwritten letter from one of the pupils following my talk, which thanked me for my time and told me that they had found what I had to say had really resonated with them – such a rewarding thing to have done.

We’re fast approaching my father’s birthday. He has two a year, on the basis that if it works for the Queen then it can work for him. As he gets older, and like a child would, he likes to count his age in fractions – at the moment he is 87 and three quarters! I’m pleased to be able to say that he is in great health, he is very important to me not only as a mentor but as a best mate – funny that when I was 17 we couldn’t even talk to one another without rowing. We’ll look forward to the birthday celebrations to come.

At Becketts Farm we’re fast approaching Easter, which means one thing – the chicks and lambs will be returning for the duration of the Easter holidays. There’s more information about it on the website and no need to book. It’s a great activity for the whole family and great to show little ones chicks hatching whilst they watch. Perhaps that’s the sign that spring is on the horizon after all!

Ticket sales are now live for our Pumpkin Extravag

🌻 SUNFLOWER UPDATE 🌻 With all the hot, dry

We have some new cakes on our coffee shop counter,

Ticket sales are now live for our Pumpkin Extravaganza, happening during the October half term. Our Halloween event has had a makeover and is now bigger and better than before! Join us for thrilling theatre, spooky spell casting, pumpkin picking and creepy carving. Meet Bella the Becketts Witch, Jack the Scarecrow and other spooky characters. Online booking is essential, so why not get in there early to have your pick of the time slots available 🎃👻🕷️Book online here - ow.ly/J5yk50KlEyU ... See MoreSee Less

RESTAURANT CHEF VACANCY 👨‍🍳👩‍🍳Are you tired of working split shifts and late at night? How about a chef job that gets you home in time for your evening meal with the family?This role will mainly be undertaken on our spacious and modern larder section providing salads, homemade quiches and lots of amazing sandwiches to our restaurant and coffee shop. After lunch, it's onto the afternoon teas! It's a busy role so not for the faint hearted!For more information and to apply click on the link below:ow.ly/kwLc50Kl2IV ... See MoreSee Less

Pies a plenty! Jan, Scott and the team have the Deli Counter well stocked this weekend. So whether it's picnics or 'picky teas' this weekend, they've got the pastries covered 😀 ... See MoreSee Less

🌻 SUNFLOWER UPDATE 🌻With all the hot, dry weather we have experienced over the past week or so, the majority of our sunflower field is unfortunately very much past its best. We will therefore be closing the field earlier than we expected, with the last day to visit being on Friday 19th August. Our Just Giving page is still up and running though if you are able to donate towards our charity appeal for DEC Ukraine Humanitarian Appeal. Any donations, big or small are appreciated. www.justgiving.com/fundraising/becketts-farmPlease be aware that if you are visiting us this week, the field does look less spectacular than you might hope 🌻 ... See MoreSee Less

We have some new cakes on our coffee shop counter, including this showstopping toffee and honeycomb cake 😍 We are so in love with this one, we hope you like it too! ... See MoreSee Less